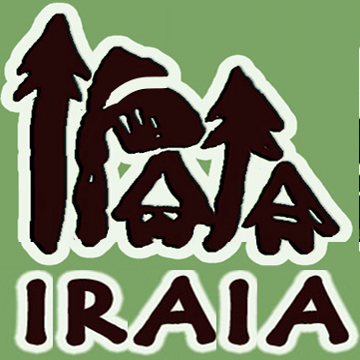 IRAIA was established in 1995 as a grocery store in Kamuning, Quezon City with photocopy services, VHS and comics rental, an electronic bulletin board system (BBS) presence, and later FidoMail-to-Internet Mail (via UUCP) service. The store had its roots as “Verzola’s Store”, owned and managed by my parents since 1954. It was later (1970s-80s) managed by my siblings as “Manang’s Store” (in deference to our Manang Aning) until my wife took over in 1992.

By 1997, IRAIA left the physical store business, became a satellite of Roberto Verzola’s Email Center, and transferred base to Baguio City, with its UUCP tunnel feed provided by the Saint Louis University server. Acquiring the domain name iraia.net, its website was set up in 2002 and, despite some ups and downs, has been online ever since.

A few words about the logo, especially about the five characters: two I’s that look like pine trees and also spears, two A’s that look like Austronesian huts on stilts, and a small-case R that looks like a palm tree crossed with a banana plant. All characters symbolize upland lifeways, set on a most appealing avocado-green background.

This whole project is dedicated to three: to the peoples of the Cordillera region in northern Philippines, which shaped many years of my life since childhood; to eldest brother Roberto Verzola, whom I idolized and tried to emulate also since childhood; and to all revolutionaries throughout history and in all corners of the planet, who are making a new world and an expanded human vision possible. #

IRAIA is derived from iraya, which in many Philippine languages means people or things “from upstream”, or “highland” folk and places. We adopted it as a choice starting point from which to view the world at large. IRAIA is a recursive acronym. In its most recent incarnation, it means “Iraia River Archives Is Alive.”

Copyright © 2000-2022 Pio Verzola Jr. All written material on this site, unless otherwise indicated, are accessible to the general public under the provisions of the GNU Free Documentation License 1.3.

You may have missed

What happened to the Indian adivasis and tribals?

Peoples of the Ituri Forest

The Indian Heritage of America