Homo habilis lived in sub-Saharan Africa between 2.6 and 1.5 million years ago, during the Lower Paleolithic era. It is thought to have descended from the australopithecines.  The habilis face was less protruding compared to australopithecines and most probably used primitive tools in a habitual way (thus the term “habilis,” or “handy”). The levels of intelligence and social organization in H. habilis are most probably more sophisticated than among australopithecines or chimpanzees.

Compared to Homo sapiens, H. habilis was short and had disproportionately long arms. its individuals on average stood no more than 1.3 m (4 ft 3 in) tall.

Habilis brain sizes are estimated to range from 550 to 687 cu cm. Their cranial capacity was on average 50% larger than australopithecines, but  is much smaller than the 1350 to 1450 cu cm range of modern humans.

Homo habilis probably coexisted with Homo erectus, representing separate lineages from a common ancestor, although another (and previously more accepted) theory is that H. habilis was the ancestor of H. ergaster, which in turn gave rise to H. erectus.

Based on dental analysis, H. habilis did not specialize on particularly tough foods. Rather, their evolution points to an increasingly generalized and generally omnivorous diet.

They used stone flakes classified as the Olduwan tool set, which were more advanced than those found among earlier hominins. H. habilis used these stones to butcher and skin animals, giving it a distinct advantage over other apes.

Compared to later Homo species, however, H. habilis used tools mainly for scavenging (e.g. scraping meat off animals already killed and partially eaten by other predators), rather than for defense or hunting. Despite its tool-using advantage, H. habilis often could not defend itself from large predatory animals such as jaguar-sized cats. 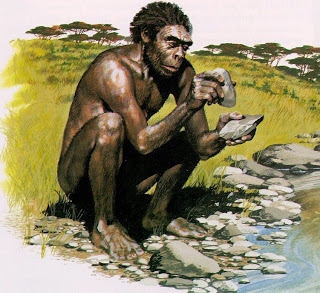 H. habilis coexisted with other Homo-like bipedal apes, but were more successful because of its early tool innovation and a less specialized diet. It eventually became the precursor of more advanced humans while others died out. H. habilis may coexisted with H. erectus in Africa for a period of 500,000 years, until it too died off while H. erectus and its descendants expanded out of Africa and into the rest of the world. #

IRAIA is derived from iraya, which in many Philippine languages means people or things “from upstream”, or “highland” folk and places. We adopted it as a choice starting point from which to view the world at large. IRAIA is a recursive acronym. In its most recent incarnation, it means “Iraia River Archives Is Alive.”

Copyright © 2000-2020 Pio Verzola Jr. All written material on this site, unless otherwise indicated, are accessible to the general public under the provisions of the GNU Free Documentation License 1.3.